Black leather is all over the runways this fall, being described by Harper’s Bazaar as a “Matrix Moment” referencing the dystopian classic movie. 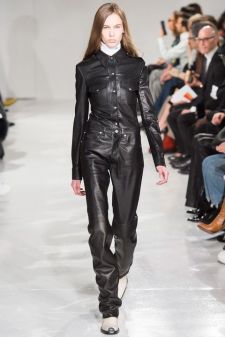 I had a pair of real leather pants in the late 80s, no doubt purchased at a Wilson Leather chain in a mall. They were high-waisted, stick-straight, but not fitted against the body, more like “slacks.” I wore them with brightly colored geometric sweaters to office Christmas parties. I was an arts/entertainment newspaper reporter – I wore them to art show openings and fashion shows, lol. I was a cliché making a clichéd statement!

I became pregnant and don’t remember anything from the next 20 years, especially whatever happened to those pants. I’m in my 50s now, will never be pregnant or nursing again, thankyoujesus, and want to re-visit that dream that I, too, could be as cool as Jim Morrison was, if I could only find the right pair of pants. I did not hit the mark before…it was the 80s! Can I now with more focused effort? 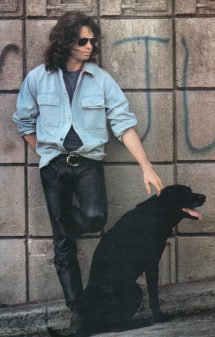 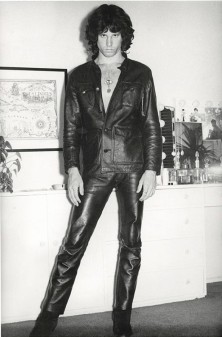 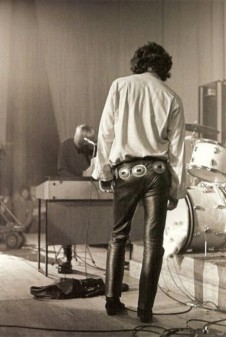 Jim, with the face of an angel and the voice of a demon. He made his own pants. Now that’s hippie.

And…is it even appropriate for an over-fifty woman to wear black leather pants? Can the older woman really wear this bold material? 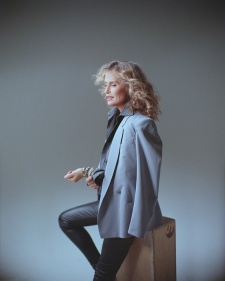 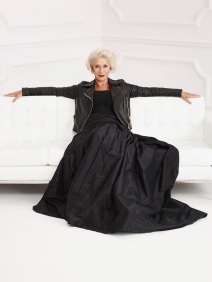 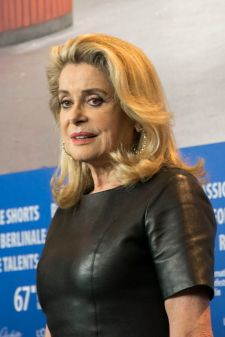 More Deneuve on the red carpet, and Beth, my fave over-fifty blogger. Ha. Obviously, it’s about attitude. You own it. Don’t let this material boss you around.

I’m not the least bit interested in black leather as “sexy” or as the object of some dude’s leather fetish. I’m interested in black leather that reads elegant, powerful, quality, timeless. I long to see its smooth matte texture against a feathery fur or a chunky sweater or a rough, faded denim, to tone down its subtext. Putting it with “opposite” things counteracts any unappealing subliminal messages. Examples include light and airy (such as fur or chiffon), cozy and highly textured (such as a fisherman’s knitted sweater), worker’s faded denim, a girly pastel color, or a sharply tailored suit jacket or blouse (like Lauren).

I already have two pair of faux leather skinny cut. Everybody’s doing that. If I’m going to do this, I want the most flattering silhouette for me. I want flared leg, boot cut, bellbottoms, even. I want a strong cool factor, no compromises. Let’s shop!

While researching I read the the BLP (Black Leather Pants) are the No. 1 fashion item women most regret buying. I assume because of the resources involved, the difficulty working them into real-life when you’re not a Rock God, or the fact that this material is constantly changing! Stretching, shrinking, sliding, wth! Leather sizing is a moving target. Wow. I read fashionistas in NYC basically wear them to parties and stand up all night long, so the pants don’t bag in the knee and butt. Advice from a girl who owns 14 pairs of black leather pants.

Resources? Real leather, flared leg, not high-waisted, not skinny cut…this is what we find on the fashionista route: 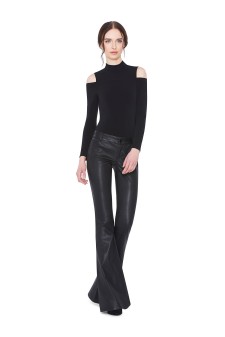 Alice and Olivia, $998. We’re not talking about faux leather skinny pants bought at the mall, lol. Although I do have two pair of those I love, Charlotte Russe and Banana Republic.

The average American worker makes $45,000. Let’s assume even less for the female half, just sayin’. Who buys thousand-dollar pants!? Obviously, not that many. Then why have magazines our whole lives been filled with clothes costing thousands? Because fashion is a fantasy item…you aren’t buying a garment to just protect your body from the weather. You’re buying an identity, a perception of being someone or having some trait (the cool girl who’d wear these pants). We all just wanna be cool, whatever that means to you, and we will find cheaper substitutes!

Maybe the “biker” or “racing leathers” routes would be cheaper? And that’s how I found the naughty Jamin’ Leather site. I’ll pass on the black leather bikini, but found this…

They are down and dirty, not as sleek as the Alice and Olivia ones, and idk what’s up with the shoes…but a tenth of the price. This model looks short – I’m short! Hmmm. Even if I bought the expensive ones, I don’t have that model’s body, right. And that no-zipper, tie-fly… could mean flexibility if the pants are a little loose or tight at the waist, there’s leeeeeeeway. And for later, if they stretch or shrink…and $129. And coupons! There were lots of Jamin’ coupons all over the Internet. I rolled the dice and ordered a 10.

They arrived so fast, my head spun. I ripped open the package aaaaand …weird huge thighs? A little tight in the waist, but the laces worked perfectly to accommodate that as anticipated BUT the crazy thighs were a good THREE inches too big for mine, yet the hips/butt were just fine. What woman has little hips and butt and big thighs? I have not met this body-builder she-man.

(Ohhhh, these thighs are for chicks who sit a bike on all-day treks…smart.)

To send them back is to admit defeat. Must find. Leather expert. To alter. Phone calls brought me eventually to a biking leather shop who send all their stuff to a mysterious “Mr. Wayne.”

I found the small, charred, soaked, concrete-block building in the sketchy part of town. All the doors were open in the garage-like work space to air out the electrical fire smell caused by wiring a hundred years old and a lightning storm over the weekend. Amidst all this soggy char sat a grandfatherly, insanely talented man who is like the secret weapon for my region’s upscale interior decorators and classic car restorers who re-sell hard-top Thunderbirds for $100,000. This building was Santa’s ruined workshop where he’d plied his trade for 50 years. He showed me pics of his grandson on his phone as well as recent projects, and I was sold.

I crouched between work tables and machinery to slip the pants on. We discussed different shoe heights (high heel, sneaker, moto boot) and taking from the inside seam to leave the outer strip alone while his chalk noted his thoughts. I left thinking, if nothing else, I’ll look like the slick front seat of a 1957 Chevy Bel Air, and just how bad is that? It’s all good. In Mr. Wayne, I trust.

Mr. Wayne was a genius. His adjustments were $50. The universe wanted to make this happen. I think total I spent about $150.

I’ve promised myself that I will wear them ten times this fall/ winter. TEN. I mean it.

Here is a classic fisherman’s sweater, classic Harley Davidson moto boot, and classic aviators or modified aviator, whatever works with your eye prescription, Forever 51’ers! Who said classic was boring? Classic is proven. 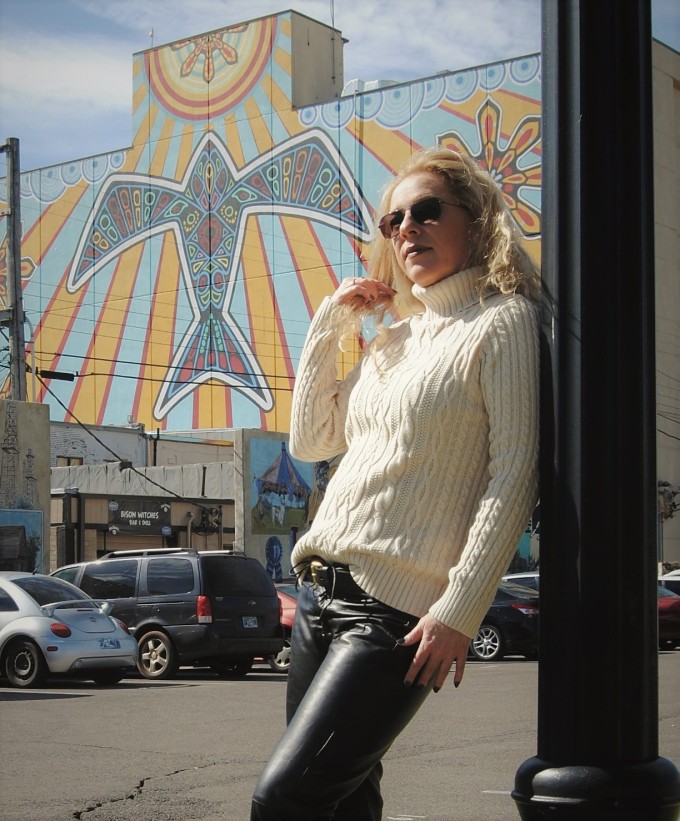 Here is an open-weave, crochet-like sweater with a tall, open-toe “shootie.” 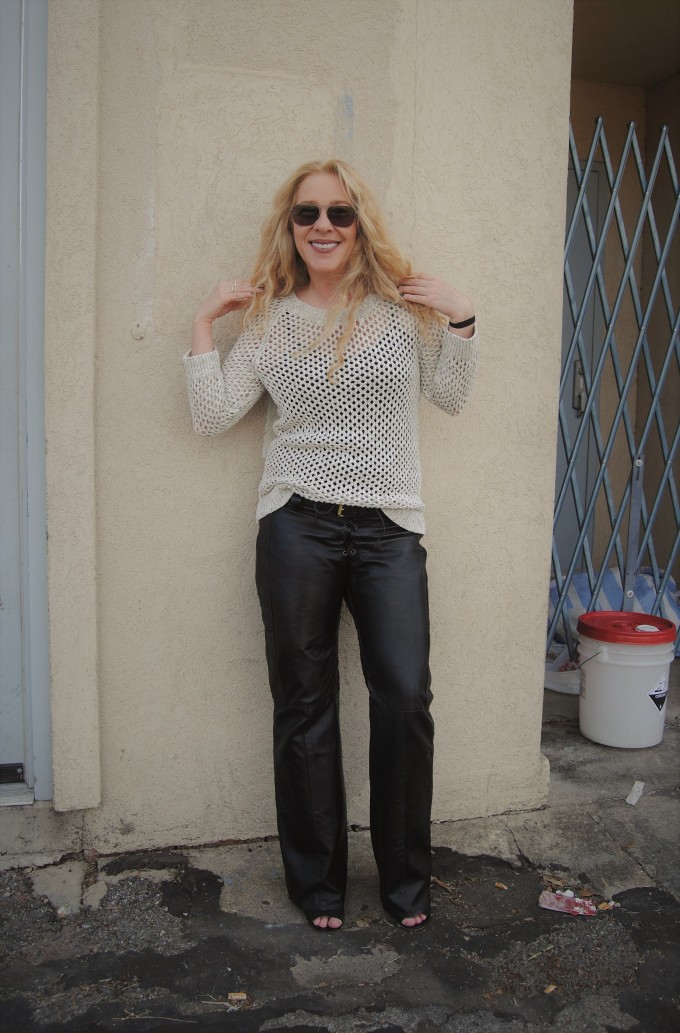 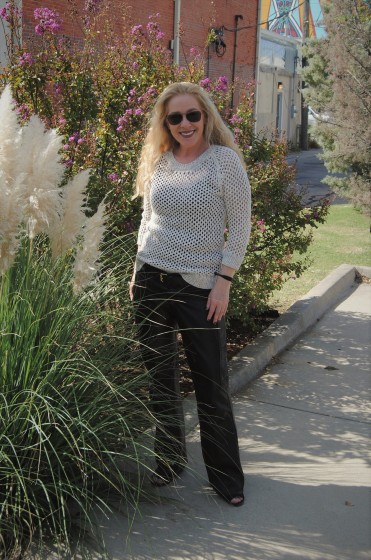 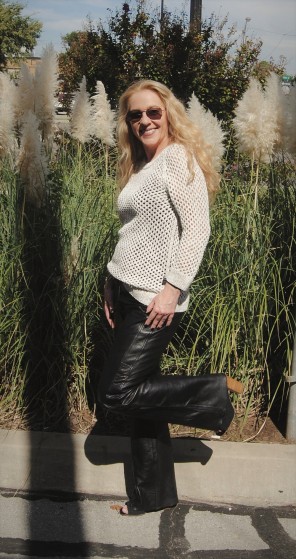 The Real-Real Behind the Scenes

It was over 80 degrees when we shot these photos. (Laughing tears. You betcha!) 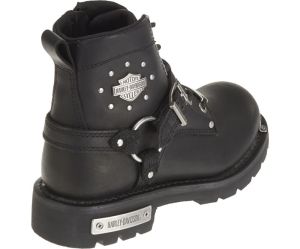 Photos of Marcie by Dale Amlee